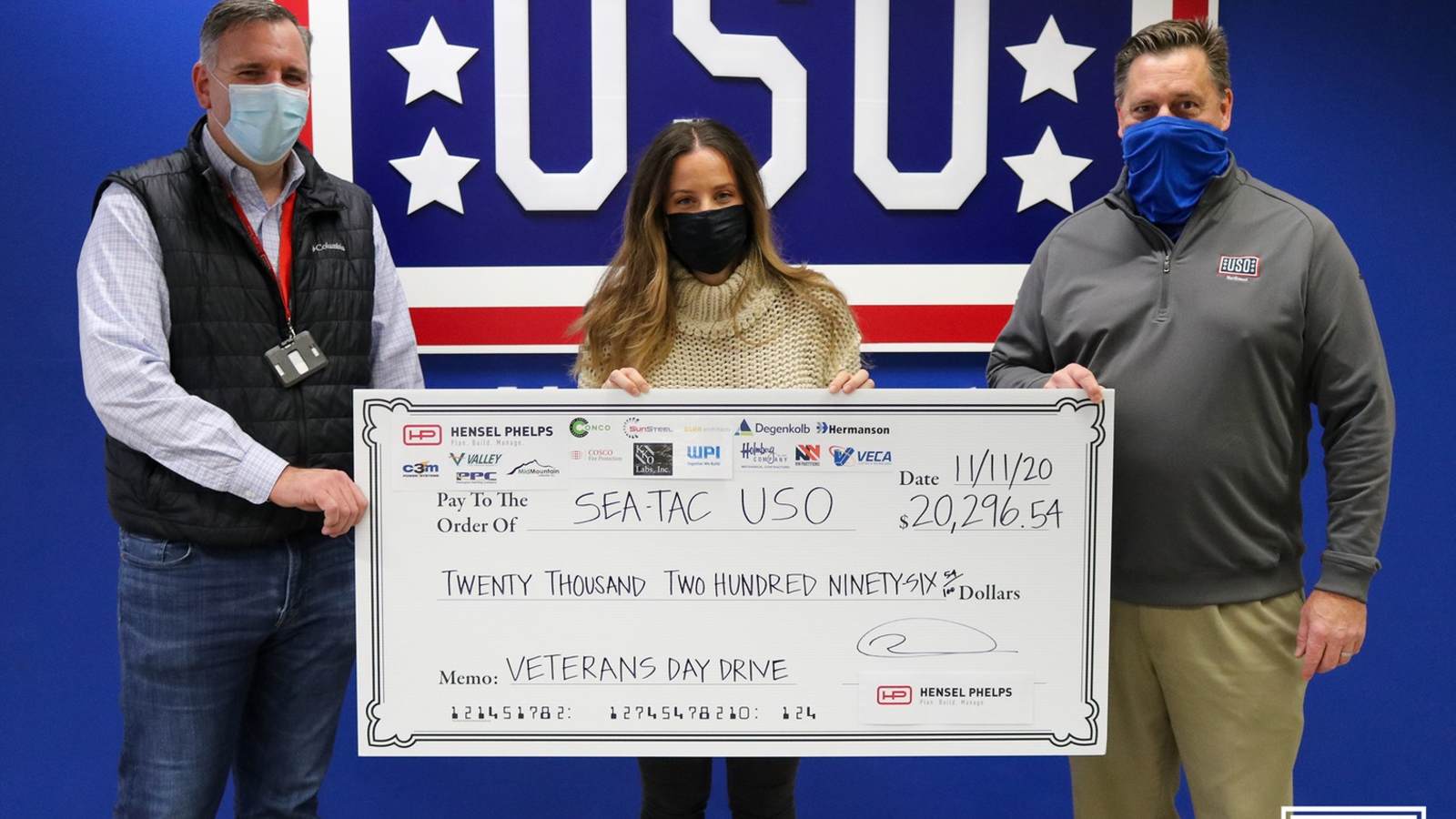 David Hutt and Madelyn Kornegay with Hensel Phelps present a check for more than $20,000 to Don Leingang, Executive Director USO Northwest, as part of their #VeteransDay Fundraising Drive. 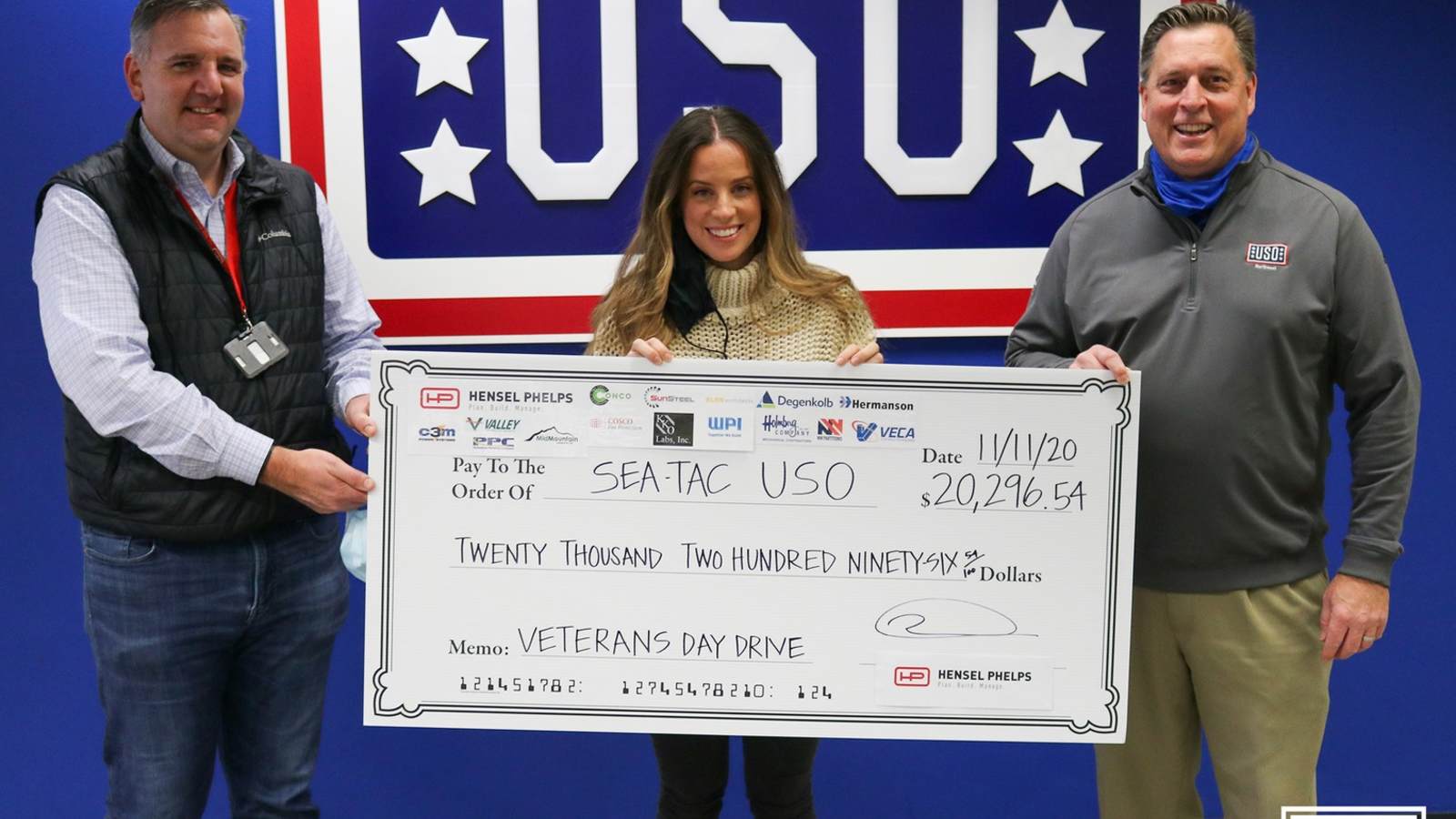 A quick photo showing the smiles behind the masks! USO Northwest is able to fulfill its mission of support thanks to partnerships with local corporate partners like Hensel Phelps.

Hensel Phelps hosts a unique fundraiser for USO Northwest, and your company can too!

In November, Hensel Phelps Construction in Bellevue, WA wanted to help raise funds for USO Northwest (USO-NW) in honor of Veterans Day. They came up with a unique idea that involved Hensel Phelps team members, vendors, partners and others. We asked Jennifer Coyne who coordinated the fundraiser about the concept.

USO-NW: What were the details of the fundraiser? How did it work?

Jennifer: The fundraiser was set-up so that people would donate money and get a virtual raffle ticket to win prizes. For every $25 donated, they would get one raffle ticket. For example, if they donated $100, they would get four raffle tickets. Prizes included a virtual cooking class, power tools, gift cards and more. The donors had the option to donate to the USO Northwest through a GoFundMe page or send a check directly to the USO. Hensel Phelps matched the donations up to $5,000.

USO-NW: Who did you ask for money and how?

Jennifer: Hensel Phelps team members and industry partners were invited to participate. Hensel Phelps team members saw posts on Microsoft Teams and received emails about the fundraiser. We sent updates every few days highlighting things like new raffle prizes, or updates on the amount raised. We also shared videos from USO Northwest to help team members learn more about the organization and see the impact of their donations – especially given the challenges created by the COVID-19 pandemic.

USO-NW: What were the results in terms of number of participants and total dollars raised?

USO-NW: How did you choose USO Northwest as the beneficiary of this fundraiser, what is the connection between Hensel Phelps and USO Northwest?

Jennifer: Hensel Phelps has been working at Seattle-Tacoma International Airport since 2016. Over the years, we have built a relationship by donating and participating in the USO Northwest’s fundraisers such as your golf tournaments. Since the USO Northwest could not do their events as planned due to COVID-19, we decided they should be the beneficiary of our annual fundraiser around Veterans day.

Typically around the holidays, Hensel Phelps sends wine to our industry partners and private clients. This year, we decided to use the money we would have normally spent on the fundraiser for the $5,000 match.

USO-NW: Do you have any advice for another company or organization who might want to do something similar?

Jennifer: Using the GoFundMe site was a great way for everyone to see how much money was being raised. USO Northwest also informed us if they received any checks so we could make sure those donors got their raffle tickets.

The USO-NW fundraising video with Medal of Honor Recipient, Flo Groberg was a fantastic mid-fundraiser boost. It really helped illustrate the “why” behind what we were doing. It really got our donors excited to support such a great organization.

USO-NW: Finally, any other thoughts from you?

Jennifer: Yes. Three things about this project really stuck with me. Through the process, we heard stories about donor’s personal connection to the USO and the Armed Forces. Donors were really moved by the fundraiser and excited to contribute.

Don Leingang, USO Northwest Executive Director, shared the video of Flo Groberg talking about the impact and importance of the USO. Throughout the fundraiser, I kept thinking about what Flo said in the video. It was wonderful to share it with our team and donors.

The raffle was insignificant in the end. Everyone was most excited about raising money for the USO Northwest. Some donors did get some cool prizes but every who participated knew their money was going to a great cause.

If your company is interested in fundraising on behalf of USO Northwest, please contact Tim Bogle at development@usonw.org or 206-719-5662.