By Kevin Hanson, The Courier-Herald 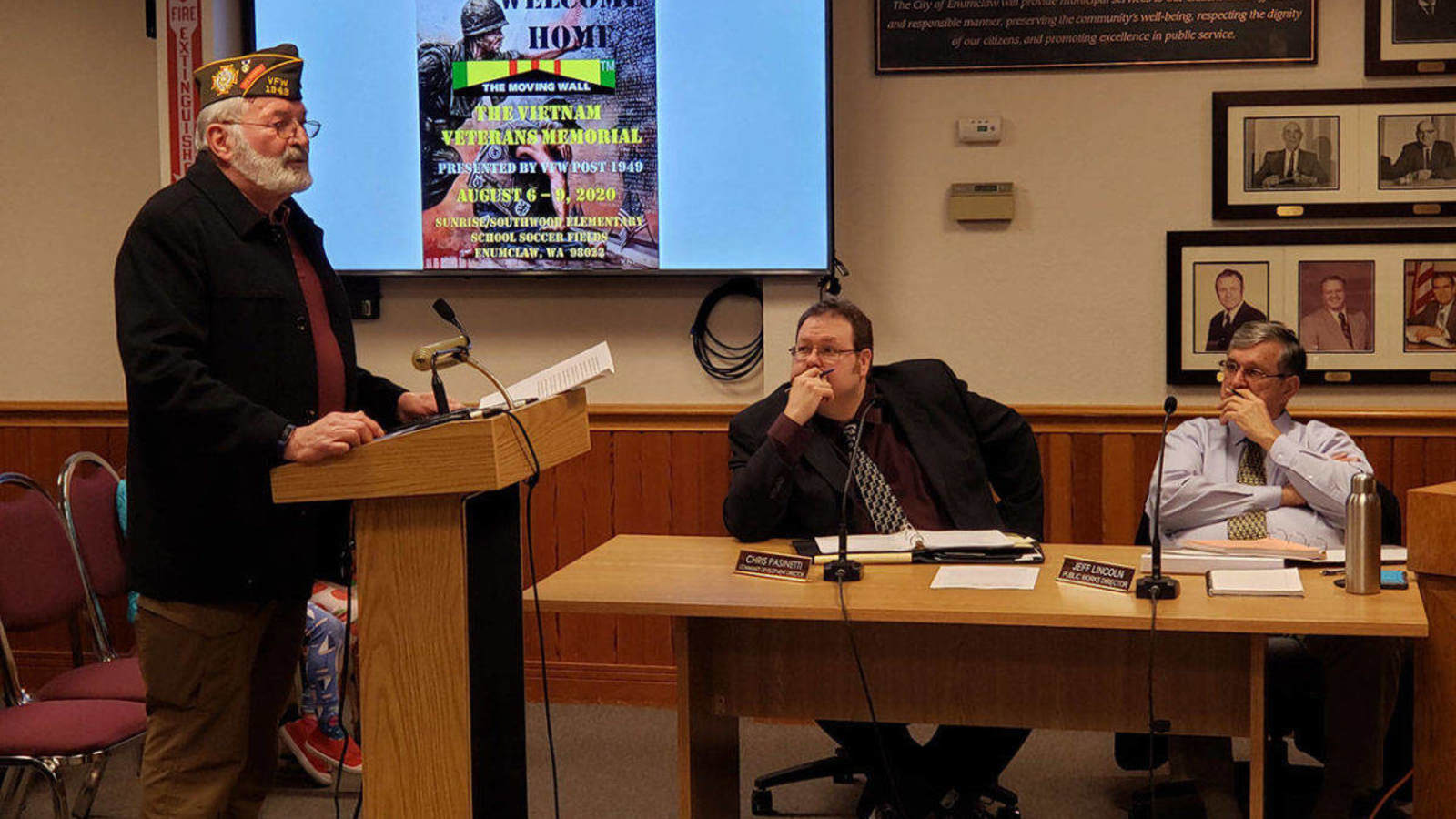 After a one-year delay, The Moving Wall has been scheduled for a summertime Enumclaw appearance.

The wall, a half-size replica of the Vietnam Veterans Memorial that was dedicated in 1982 in Washington, D.C., was originally planned to be on display in Enumclaw Aug. 6-9, 2020. Like so many things, the pandemic threw a wrench into the works and prompted local organizers to push things to this year.

Now, everything is on track again. Keith Mathews, a member of Enumclaw’s Post 1949 of the Veterans of Foreign Wars, has confirmed the Moving Wall will be in Enumclaw Aug. 5-8.

Many of the plans for the Moving Wall – which pays tribute to more than 58,000 American who lost their lives in Vietnam – remain just as they were in 2020.

It was February of last year when Mathews stepped in front of the Enumclaw City Council to outline Post 1949’s plans. He related that he had personally spent six years lining up an Enumclaw appearance by the wall.

The Moving Wall is engraved with the names of 58,228 Americans who died during the Vietnam War, with the final three added in May 2002. The war is generally considered to have been fought from late 1955 until the fall of Saigon at the end of April 1975, eventually spreading through several countries of Southeast Asia.

There are now two Moving Walls that travel throughout the country, one of which will arrive in Enumclaw and be placed in the large, grassy field between Sunrise and Southward elementary schools.

Mathews reported the Moving Wall will be trucked into Enumclaw and assembled on the field, situated so Mount Rainier provides a majestic backdrop.

During its stay in Enumclaw, Mathews said, the Moving Wall will be open to the public 24 hours a day. There will be lighting at night and ceremonies every morning. The Moving Wall is known to stir strong emotions and some visitors ask for private time; for that reason, Matthews said, local organizers will arrange special visits for veterans and their families.

Evening security will be provided by the Army National Guard and members of the special forces stationed at Joint Base Lewis-McChord, as well as local VFW members. Regarding the nighttime security, Mathews acknowledged the Moving Walls have, on occasion, been the target of vandalism.

Anyone wishing to add additional names or provide other information can contact Mathews by email: bfh.org@gmail.com.

The Moving Wall stands 6 feet tall at the center and gradually tapers to 4-foot panels at each end. The structure consists of two walls, each being 126.2 feet in length, for a total length of 252.4 feet. That’s half the size of the D.C. memorial and nearly the length of a football field.

The Moving Wall is now made of aluminum panels. The original Plexiglas panel and wood-framed structure was retired after the 1986 season and was replaced by Formica-laminated masonite panels and steel tubular framing. However, the varied and often severe weather conditions proved too harsh for the laminated panels and both structures were completely rebuilt at the end of 1988.

THE STORY BEHIND THE MOVING WALL

The story begins in 1982 when John Devitt attended the dedication Vietnam Veterans Memorial in Washington, D.C., and departed vowing to share the experience with those who did not have the opportunity to visit the nation’s capitol.

He and other Vietnam veterans built The Moving Wall, which went on display for the first time in Tyler, Texas, in October 1984.

A second Moving Wall was built in the late 1980s and, due to high demand, a third was built in 1995. One has been retired and is on permanent display while the other two travel the United States from April through November, spending about a week at each site.